As you all know, I spent this past weekend in northern Pennsylvania attending the InfectScranton convention.  I had a great time.  Many thanks to Shannon Keith for organizing the event, and to all the terrific staff members who kept things running well and who provided a lot of ambiance for the setting (the young girls who played the nurses were awesome).  And a big shout out to all the attendees and the citizens of Taylor and Scranton who made us all feel welcome.

This was one of my best conventions ever.  I had a great time not only getting to know the fans (being a small convention, it was more intimate than the larger ones I've attended), but also spending time with my fellow attendees.  It was really a great time. 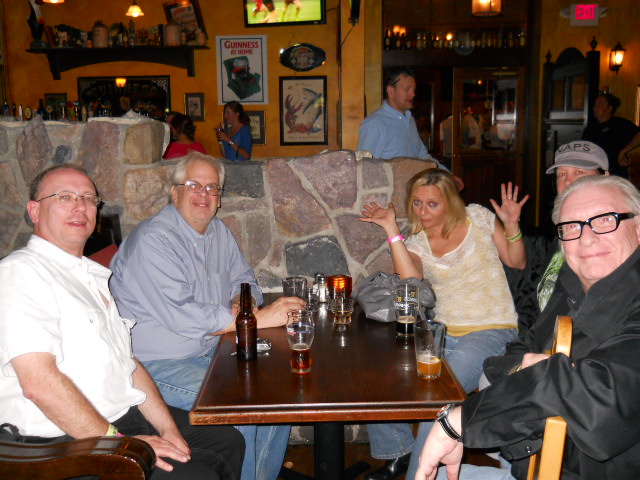 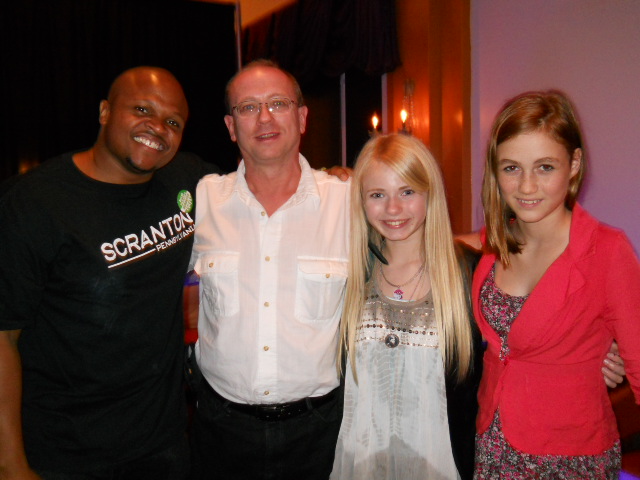 Finishing up the pub crawl with some of the cast members from The Walking Dead: IronE "T-Dog" Singleton, me, Addy "little girl zombie" Miller, and Madison "Sophia" Lintz. 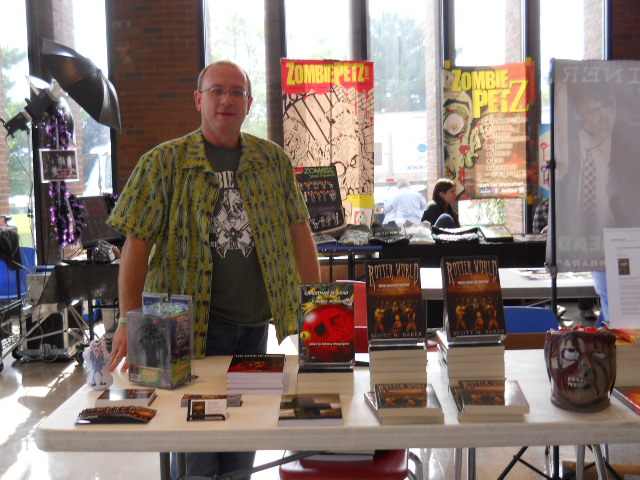 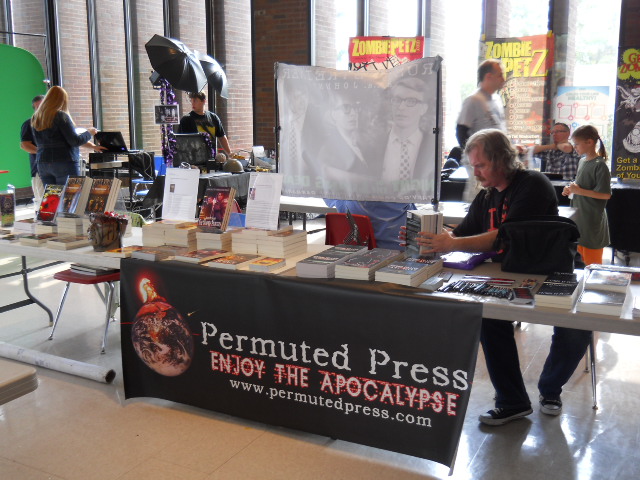 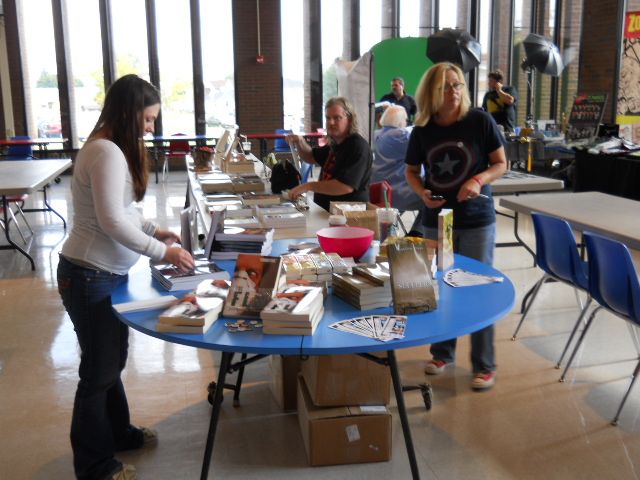 Jackie and her daughter selling books. 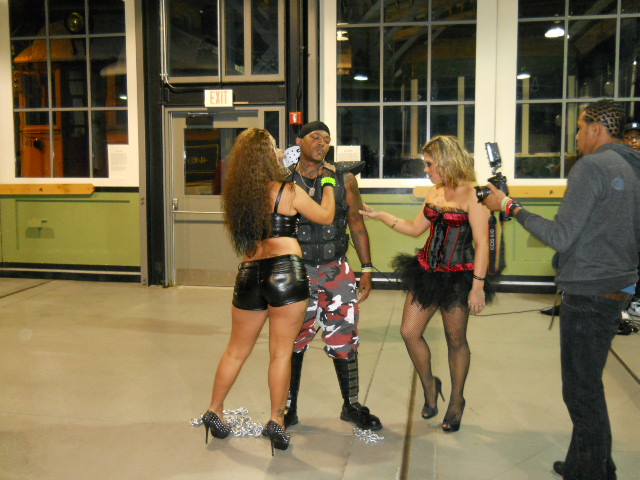 Guest performer Wyzae preparing to put on what was a really unique show. 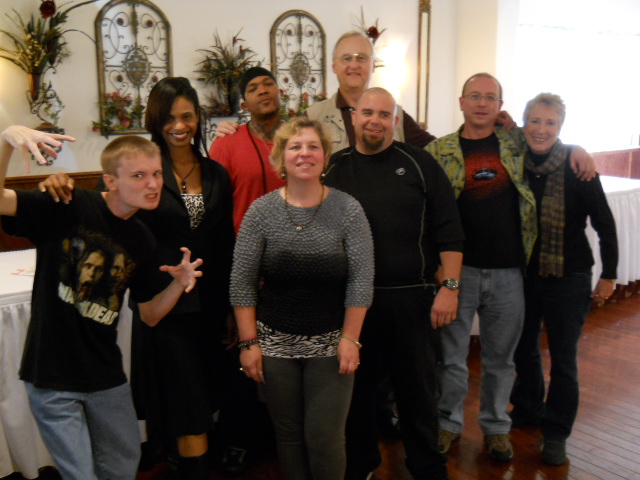 Farewell photo after Sunday afternoon's brunch with the zombie authors:  (from left to right) Jeremy "walker" Ambler from Season Two of The Walking Dead; Keisha "zombie wife" Tillis from Season One of The Walking Dead; Wyzae; Michele and Tom, two of the fans who came to hear the authors speak; Jim "helicopter zombie" Krut from the original Dawn of the Dead; me; and Judith "Barbara" O'Dea from Night of the Living Dead.
Posted by Scott M. Baker at 9:40 PM 4 comments:

The InfectScranton Convention begins this Saturday at Riverside High School in Taylor, Pennsylvania.  The hours are from noon to six on Saturday and noon to four on Sunday.  I'll be attending with fellow Permuted Press authors Jacqueline Druga and Kim Paffenroth.  The three of us will be signing books on both days and, at two o'clock on Saturday, will be sitting a panel titled "Writing About Zombies and Horror: the Creative Process."

Click here to see a full list of the celebrity guests and here for a schedule of events.

I hope to see you all at the convention.
Posted by Scott M. Baker at 6:23 PM No comments:

Congratulations to the Goodreads' Winner

From 14 August to 14 September, Permuted Press ran a giveaway of Rotter World on Goodreads.  More than seven hundred and seventy readers signed up.  Congratulations to the winner.  I hope you enjoy the book.  And a major thanks to the rest of you for all your support.
Posted by Scott M. Baker at 12:00 PM No comments: 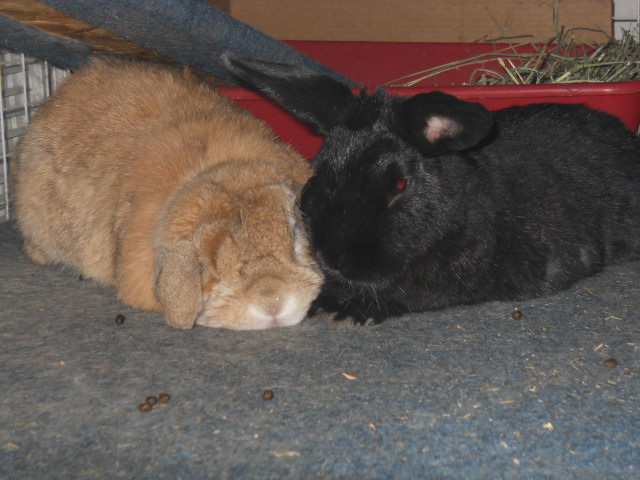 Nothing beats being with the one you love on a lazy Sunday afternoon.  Accept carrots.
Posted by Scott M. Baker at 12:51 PM No comments:

Schedule for Upcoming Blog Tour of The Vampire Hunters Trilogy

Innovative Online Tours has scheduled a six-week blog tour to promote The Vampire Hunters trilogy.  Below is a list if the dates of the tour, the schedule blogs, and what can be expected at each stop.  I hope everyone will stop by and visit.

HorrorTalk posted a review of Rotter World this afternoon, giving it three out of five stars and saying: "..Rotter World is packed with conflict.  Rotter World is also packed with action. From the opening pages of the attack on the warehouse, something is always happening. It could be rumbles with the undead, man versus vampire, man versus man, or just some arguing, tempers are high in this book. While the characters themselves are rather stereotypical to the point that they all kind of blend together, it's more than made up with the fights and brawls found throughout. As I was reading it, I couldn't help but think that it would be a pretty good popcorn film."  Please check out the entire review here.
Posted by Scott M. Baker at 6:58 PM No comments:

There's a lot to catch up on since Blogger exiled me, so let's jump right in.

Two of my short stories have been accepted for publication in upcoming anthologies being published by Knightwatch Press.  "The Last Flight of the The Bismarck," about an outbreak of steampunk zombies aboard an airship over New York City, will be featured in Machina Mortis: Steampunk'd Tales of Terror.  "The Hunger," about cannibalism during a zombie apocalypse (as if the possibility of being eaten by zombies wasn't bad enough), will appear in their Cannibal Anthology.  The dates of publication are not set yet; I'll let you know when they are.  In the meantime, please check out the links to see a list of the other great authors who will also be featured in the anthologies.

I'm also very excited about the two conventions I'll be attending in the next few months.  The first is InfectScranton from 21-23 September.  I'll be there with fellow Permuted Press authors Jacqueline Druga and Kim Paffenroth.  Other guests include stars from AMC's The Walking Dead (including Addy Miller, the "little girl zombie" from the first episode, and Madison Lintz, who played Sofia) as well as several stars from Romero's Night of the Living Dead and Day of the Dead (Judith "Barbara" Odea, Leonard "machete head zombie" Lies, Sharon "nurse zombie" Ceccatti (Hill), and Jim "helicopter zombie" Krut) plus many more guests.  Though I'm not at liberty to divulge any details, I can say that the concept of this convention will be unlike any other I've been at.  If you're in the area that weekend, it's definitely worth your time to swing on by and get infected.

From 19-21 October I'll be in Fort Meyers, Florida, attending Zombicon 2012.  In addition to fellow Permuted Press author Jacqueline Druga, attendees will include and Joe Schreiber, author of the Star Wars' zombie novel Death Troopers, many cast members from Romero's Day of the Dead (Lori Cadille, Gary Klar, Joe Pilato, and Terry Alexander), plus several other special guests.  This promises to be an epic event.

From 22 October to 30 November I will be engaged in a six week blog tour with Innovative Online Book Tours for The Vampire Hunters trilogy.  This will include a series of interviews, reviews, guest blogs, and a chance to win a free Kindle.  Every day of the tour I'll post both here and on Facebook where I'll be appearing, so please be sure to drop by and visit.

I have several other things in the works, but I won't post about those until they're finalized.

So it's going to be a busy two months for me.  I hope to see you all at the conventions or on the blog tour.  And thanks for following me.
Posted by Scott M. Baker at 6:44 PM No comments:

My apologies to those who have visited this page only to find nothing posted for the past three weeks.  Thanks to the joys of technology, and my inability to understand it, I was locked out of my Blogger account.  However, I'm back on line thanks to Alison Beightol, who is smarter than me when it comes to the Internet.  So please keep tuned in -- I will be posting some exciting news in the next few days.
Posted by Scott M. Baker at 4:14 PM No comments: