On Thursday night, 4 September, myself and fellow zombie writer Shana Festa and audio voice actor David Dietz will be hosted by Jackie Druga on the "Apocalypse Nana" radio show on the Prepper Broadcasting Network where we will be the contestants in Apocalypse Trivia Night. So if you want to see how much I really know about the end of the world, tune in here Thursday night at 9PM EST/6PM PST. Or tune in to test your own knowledge of the end of the world.

In addition to Yeitso, which was released 23 August, I have four more novels, a novella, and a short story coming out over the next year:

The Vampire Hunters: Vampyrnomicon (Emby Press). Drake Matthews and Alison Monroe battle The Master for control of the Vampyrnomicon, the book that reveals the darkest secrets of the vampire society. Scheduled for release 10 October 2014.

The Vampire Hunters: Dominion (Emby Press). Drake Matthews and Alison Monroe must deal with a vampire apocalypse in Washington that threatens to engulf the world. Scheduled for release early 2015.

Rotter Nation (Permuted Press). The sequel to Rotter World.  Mark Robson sends Natalie Bazargan and her Angels on a cross-country suicide mission to transport the Revenant Virus vaccine to the government-in-exile in Omaha while his team wages a vendetta on a local rape gang. Scheduled for release 14 July 2015.

Rotter Apocalypse (Permuted Press). The surviving Angels join the war to take back America from the zombies, and Mark Robson must deal with the many mistakes he has made during the apocalypse. Scheduled for release 29 September 2015.

Nazi Ghouls From Outer Space (Self-published novella). A failed attempt by the Nazis to put three men into space during the last days of World War II comes back to terrorize the American southwest years later in the form of flesh-eating ghouls. Release date TBD.

"From Space It Came" in the Monster Hunter -- Doomsday anthology (Emby Press). A giant wolf spider mutated by radiation crashes to Earth inside the space station and threatens a Florida college town. Scheduled for release 10 October 2014.

Interesting Posts From Other Websites

Jason White recently wrote a piece titled Top 10: The Best Horror Flicks of the 1980s. I'm not sure if I agree with numbers 9 and 10 (there may be more worthy entries), but I definitely agree with the top eight picks.

For the writers among us, paranormal author Jami Gold wrote an interesting article The Character Debate: Strong and Vulnerable? that relates the difficulty in creating a main character that is realistic. Even writers with several books under their belt will find this useful.

And finally, there is The 10 Dark, Gritty Rules of Dystopian Science Fiction, a tongue-in-cheek look at what every writer needs to include in order to write the "perfect" dystopian Sci-Fi story.

Yeitso Is Available in Paperback and Kindle

Yeitso is now available from Amazon in both trade paperback and Kindle formats. 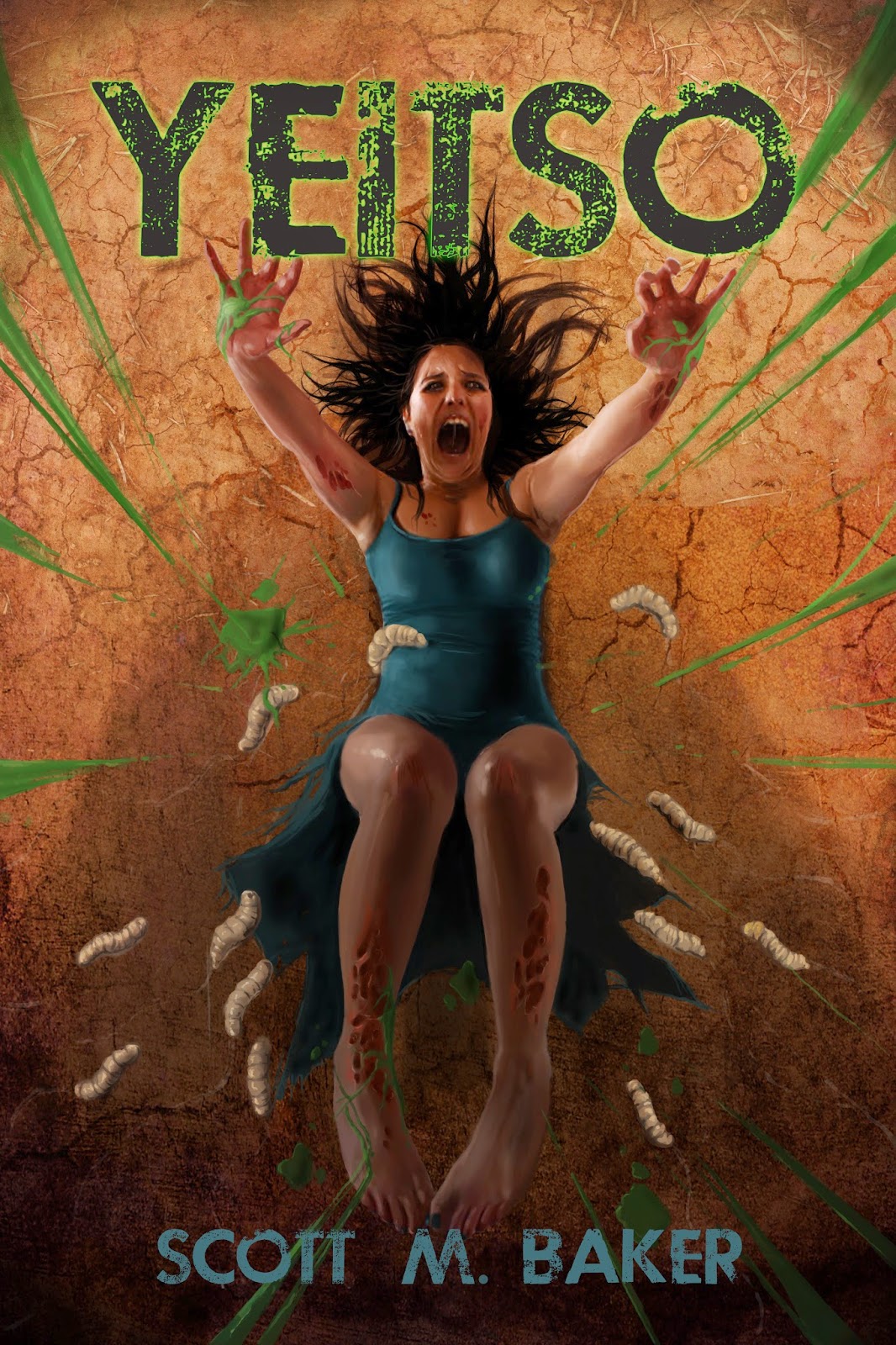 Congratulations are in order for the winners of Blood Bound Books' Yeitso trivia contest. Each of the winners received a free digital copy of the novel. I hope you all enjoy the book.

Interesting Posts From Other Websites (All Vampire Edition)

As promised, I've returned with my weekly listing of interesting posts. This time I decided to keep the theme entirely vampires.

Vampires.com has published its list of vampire books being released this August, including the biography of one of my idols, Joss Whedon. Check it out here.

Fellow vampire author Brian McKinley posted WatchMojo's video list of Top Ten Vampires. Although I don't agree with their ordering (or some of the animated entries included the honorable mention category), this list is pretty spot on.

And to keep the theme going, BuzzFeed posted Nikki Lyka's list of The Five Greatest Vampire Novels Written in the Past 100 Years, which originally appeared in Dark Beauty magazine. This is a very eclectic list, and I'm sure most of my fans wil disagree with the choices.

Finally, fans of Seth Grahame-Smith's Abraham Lincoln: Vampire Hunter will be happy to hear that the author has completed the sequel, The Last American Vampire, which is scheduled for release this January. Check out the details here.

Recently, Tiffany Moorman of Gothic Moms Paranormal Book Review posted a review of The Vampire Hunters in which she called the novel "A Fangtastic read for traditional vampires everywhere, regardless of gender. Action packed with fight scenes so vividly detailed readers will feel as though they are right there taking part in the action. Filled with blood, gore, thrills and chills to make every horror lover smile." Read the entire review here.
Posted by Scott M. Baker at 8:08 PM No comments:

Yeitso Will Be Released 23 August

The much-anticipated release (at least by me) of Yeitso is scheduled for next Saturday, 23 August. Prior to that, Blood Bound Books will be running a week-long trivia contest to give away a free e-book version of the novel.

What is Yeitso? As I've mentioned before, it's my homage to the 1950s B-grade giant insect movies that influenced me as a Monster Kid. Below is the official description from the jacket cover:

Yeitso brought me back to those glorious Saturday afternoons of my youth watching Creature Double Feature. - Peter Schwotzer, Famous Monsters of Filmland

Big city life is dangerous. Rape, murder, gangs… not the best place to raise a teenage daughter on your own. That’s why big-city cop and recent divorcee Russell Andrews agreed to move to the desert and be the sheriff of a sleepy little New Mexican town. But the desert has secrets. Giant secrets. Secrets that eat men alive and threaten entire towns. Andrews comes face to face with a thing out of a myth, something that modern man has no name for. The Navajo call it Yeitso.

Yeitso is the perfect blend of small town quirk and pulpy monster madness that will leave you cringing and wanting more! - Ryan C. Thomas, author of Salticidae and Hissers.

It's giant killer beetles! How can you not love it? - Jeff Strand, author of Mandibles
Posted by Scott M. Baker at 2:27 PM No comments:

Blood Bound Books is counting down to the release of Yeitso with seven days of trivia. Winners will receive a FREE digital copy of the book. The games begin Saturday, 16 August, at noon! Go to the Blood Bound Books' Facebook page to enter, or keep checking in here.
Posted by Scott M. Baker at 2:30 PM No comments:

Back By Popular Demand: I'll Be on Apocalyose Nana Radio 4 September

My good friend and fellow Permuted Press writer Jackie Druga has asked me to return to Apocalypse Nana radio on 4 September at 9 PM EST for Trivia Night. The winner gets a free Ebola vaccine. The losers get to join the mass of humanity who will have their guts liquified by the virus and bleed out. I'll post more details later, but please note the date in your calendar. This promises to be a fun evening.
Posted by Scott M. Baker at 11:58 AM No comments:

Been on Vacation, Sick Call

I missed the last two sets of postings from other websites because I was on vacation in Boston last Monday and, this past weekend, I was down with a head cold I brought back from Massachusetts as an unwanted souvenir. I'll resume my usual Monday morning postings next week, and will have some great news to share throughout this week.
Posted by Scott M. Baker at 10:12 AM No comments:

I Will Be Attending Winter Garden Wonderfest 30 November 2014

On 30 November 2014, I will be attending the Winter Garden Wonderfest at the Bella Room Banquet Hall in Winter Garden, Florida. I'll be signing copies of my novels and anthologies, including my newest books Yeitso and The Vampire Hunters: Vampyrnomicon, which will be released this fall. This is a convention dedicated to the Florida Geek Scene, so if you're a local you need to check this out.
Posted by Scott M. Baker at 10:20 AM No comments:

Dina of Dina Rae's Write Stuff posted an interview in which we discuss vampires, writing, the CIA, Nathan Fillion, and my upcoming novel Yeitso. Check it out here.
Posted by Scott M. Baker at 12:35 AM No comments: