Time To Get My Butt Into Gear

Let's start with an unrevised preview of my current work in progress, a satirical zombie novella titled This Is Why We Can't Have Nice Things During the Zombie Apocalypse 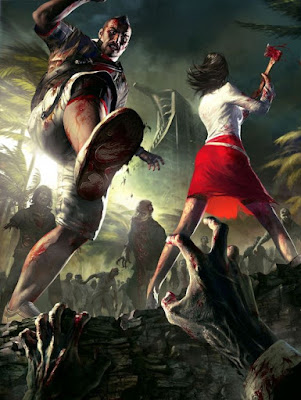 Yay! It finally happened – the zombie apocalypse broke out. I knew it would. All my friends knew it’d happen. I mean, how could it not considering what we eat and how we treat the planet. So, I wasn’t surprised two days ago when the news reported on the outbreak. Though I’d never admit it to anyone, I was excited at first. I had planned this out in my mind for years – I would team up with either Chris Pratt, Chris Evans, or Chris Pines and hunt zombies. Once we had killed off all the living dead, we would then start to repopulate the planet. It had been my favorite fantasy.
Instead, I get to experience the zompoc with my family.
Okay, that’s mean. They’re not as bad as all that. They love me and treat me okay but, well, they’re my family.
My dad is decent enough – at least he tries to be. He means well, but the constant dad jokes get tiring. That’s really the only bad thing I can say about him. He’s pretty decent to us, trying to strike a balance between having a good time and instilling us with what he calls “traditional values” – hard work, integrity, loyalty. Only a few times has he come down hard on us which, in truth, we deserved. He’s done a good job raising us three kids by himself (Mom died in a car crash when I was two). Dad works from home as a freelance writer for a survivalist magazine. Not that he’s a prepper. He always talks about a hurricane that nearly wiped out New Orleans years ago and tells us it’s better to be safe than sorry. I always teased him about being paranoid. I guess I owe him an apology.
The prepper title goes to my older brother CK (his real name is Charles Kenneth, but everyone calls him by his initials). He’s the hardcore survivalist; he’s been that way since he graduated high school five years ago. CK bought the house across the street from us – the one on the hill – because it had a good cross fire, or something like that. Since then, he’s turned the house into a fortress, building an underground shelter stocked with a six-month supply of dried food and enough guns and ammunition to fight off a small country. If that’s not bad enough, he acts like a super soldier (CK never served in the military because he doesn’t like taking orders). A couple of months ago we all watched Red Dawn. I thought it was fun movie, lots of action, and Chris Hemsworth was cute; CK took notes throughout the movie. He’s always telling me and my sister than we’re snowflakes that’ll never survive the heat of battle.
With my sister, he’s probably right. Cameron is a bit of an airhead. She’s a senior in high school (two years ahead of me) and barely passing. My friends say she gets by on her looks and her personality; I don’t get it, though. Yeah, she’s pretty. But personable? Cameron has no real friends, at least none that come over to the house. And while she has plenty of dates, she’s never had a boyfriend who has stayed around for more than a few weeks. She’s glued to her cell phone listening to music, texting on-line friends, playing games, and watching YouTube videos. She’s gonna freak out when the cell phone service goes down.
And of course, there’s our two dogs, Boxers named Luke and Leia (yes, Dad is a huge Star Wars fan). They are loveable and protective but are not the brightest pups from the litter. Leia barks at everything – the mail truck, the school bus, squirrels, birds, the neighbor’s cat. Luke is much more laid back and is completely devoted to Dad; he follows him around the house all day, curls up by his desk when he writes, and even sleeps cuddled up with him in bed at night.
Enough writing for now. I want to watch the live coverage of the apocalypse.

Email ThisBlogThis!Share to TwitterShare to FacebookShare to Pinterest
Labels: This Is Why We Can't Have Nice Things During the Zombie Apocalypse

I'll Be Attending the 2019 Author's Night at the Expo

I have my first book signing event set up for 2019. On Friday, 18 January, I'll be attending the 2019 Author's Night at the Vineyard at the Zorvino Vineyards in Sandown, New Hampshire. The hours are from 6 to 9 PM and is free to the public. I'll be signing The Vampire Hunters trilogy, the Rotter World saga, and Yeitso. The event is free to the public.

I look forward to seeing you there.
Posted by Scott M. Baker at 10:23 PM No comments: 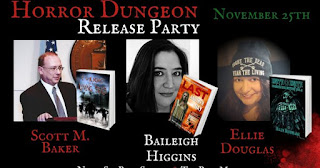 Just a reminder that tomorrow at 1PM EST (10AM UTC) I will be the final episode of the Horror Dungeon Release Party which will be hosted by yours truly, Baileigh Higgins, and Ellie Douglas. I start things off at 1PM and will be running a few contests with giveaways, so see you then.
Posted by Scott M. Baker at 10:03 AM No comments:

And no, I don't mean going to the mall and smacking the shit out of idiots who shove aside and knock down children and old ladies to get a good deal (although that would be fun). I'm talking about turning your Black Friday into Cyber Monday. Go to my Amazon Author's Page and do your shopping there. Not only do you get to sit around your house in your PJs and bathrobe, drinking a hot cup of coffee while getting all your shopping done, but you help out an independent writer.

If zombies are what gets their brain juices flowing, and you really like them, then give them the gift of a zombie trilogy, my Rotter World saga (Rotter World, Rotter Nation, Rotter Apocalypse) about humans and vampires trying to survive a zombie apocalypse. Don't forget my Nazi zombie novellas -- Nazi Ghouls From Space and Twilight of the Living Dead. Cruise of the Living Dead: A Zombie Anthology is also a great choice as is Dead Water, my novella which is a sequel to Cruise.

Maybe the person you're buying a gift for is a pain in the neck and prefers vampires. Then give them The Vampire Hunters Omnibus which includes all three books in the trilogy -- The Vampire Hunters, Vampyrnomicon, and Dominion. The best part is they don't sparkle, they don't brood, and they don't date teenage girls. My vampires eat their way through humans like they're Christmas cookies. 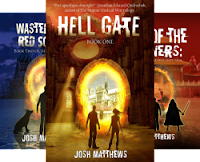 Okay, I get it. You're embarrassed to admit you read my stuff. (Mom: "You read this psycho's books?" You: "Errr... good gravy, mom. Can I have the recipe?") Understandable. Then don't forget my young adult post-apocalypse horror series the Hell Gate Saga under my pseudo Josh Matthews -- Hell Gate, Wasteland in Red Square, and Rise of the Sataners. They're fun, adventurous, action-packed but won't warp young impressionable minds.

So this Black Friday and Cyber Monday, let your fingers do the shopping on Amazon and give the best gift you can give a loved one, the gift of reading.
Posted by Scott M. Baker at 11:55 PM No comments: 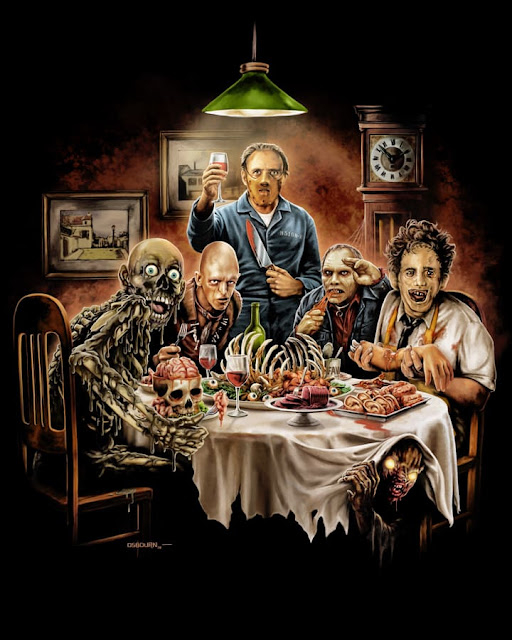 Happy Thanksgiving to my family, friends, and fans. May the most horrifying thing that befalls your Thanksgiving is that you run out of leftovers.
Posted by Scott M. Baker at 9:01 AM No comments: 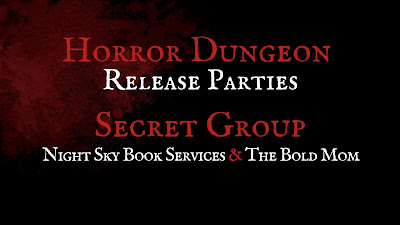 This Sunday, 25 November, from 1PM to 5 PM EST (10AM to 2PM PST), myself and three other writers will be hosting the Horror Dungeon Release Party sponsored by Night Sky Book Services and The Bold Mom. I'll be on at 1PM and will be promoting my latest novella Twilight of the Dead and discussing zombies and writing. And yes, there will be contests and giveaways.

The other writers hosting the event are Baileigh Higgins, Ellie Douglas, and Elizabeth Dahl.

I'll post the link to the event when it's available later this week.
Posted by Scott M. Baker at 2:06 AM No comments:

I'll Be a Guest This Sunday on The Dorkening

This Sunday, 11 November, at 1000 AM EST I'll be interviewed live on The Dorkening podcast where we'll discuss writing and my novels, Rick Grimes' last episode and the future of The Walking Dead, and Overlord. You can catch us live on The Dorkening's Facebook page or on their YouTube feed. See you in the morning.
Posted by Scott M. Baker at 11:19 PM No comments: