My Convention and Book Signing Schedule for 2018

Over the past few weeks, I've been organizing my schedule for attending conventions and book signings throughout New England for 2018. The events I've definitely scheduled so far are listed below. I'll be signing copies of The Vampire Hunters trilogy, Rotter Nation and Rotter Apocalypse, and Yeitso.

April 15 -- The Night By the Sea event sponsored by the New England Authors Expo. The event is from 2PM to 6PM and will be held at the Red Hook Brewery at 1 Red Hook Way in Portsmouth, New Hampshire. The event is free to the public, so come and meet with the more than thirty-five writers and publishers who will be at the event.

July 25 -- The New England Authors Expo's event from 4PM to 9PM at the Danversport Yacht Club at 161 Elliot Street in Danvers, Massachusetts. The event is free to the public, so come and meet with the more than thirty writers and publishers who will be at the event.

September 14-16 -- NoCon at the La Quinta Inn and Suites at 24 Front Street in Manchester, New Hampshire. This convention is still being put together; more details will be posted as they become available. 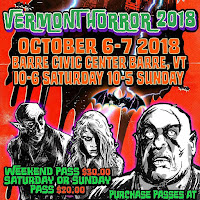 October 6-7 -- The first ever Vermont Horror Convention. The convention will run on October 6 from 10AM to 6PM and on October 7 from 10AM to 5PM. The current celebrity guest list includes Costas Mandylor of the Saw franchise, Tony "Jason Vorhees" Moran, and Melissa "crippled bicycle zombie" Cowan from The Walking Dead.
Posted by Scott M. Baker at 11:03 PM No comments:

Swing on by Reading Zombie on Facebook. It's an epic site for zombie aficionados. Today there is a Q&A with me (ask anything; I don't shy away from tough questions) and a zombie meme contest with a chance for four contestants to win one of the following: a signed copy of Rotter Nation, a signed copy of Rotter Apocalypse, a Kindle copy of Nazi Ghouls From Space, or a Kindle copy of the anthology Cruise of the Living Dead. In the coming weeks there will be Q&As and interviews with other zombie writers. This is your chance to find some great new talent within the genre.
Posted by Scott M. Baker at 12:00 PM No comments: